An animal activist has praised a magistrate for handing down an unprecedented decision in an animal abuse case that saw two dogs kept in small cages.

Alison Bezzina took to her blog to thank magistrate Joe Mifsud who issued a fine of €2,500 to the owner after he was found guilty for failing to take care of his dogs by keeping them in smaller cages than dictated by the law and not chipping them.

“Usually such a thing would not have ended up in court and the fine is probably the highest handed out for something like that,” she told Lovin Malta.

In his decision, Mifsud also took a hard stance against animal cruelty and neglect, noting the different ways an animal can be abused both physically and mentally. 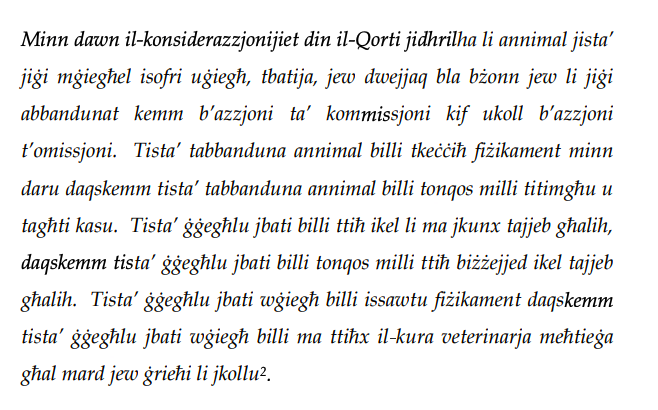 “You can abandon an animal by physically kicking it out of your home or by failing to feed or pay enough attention to it. You can make it suffer by making it eat food that is not good for it as well as by not giving it enough food,” he said in his sentence.

“You can hurt it by beating it physically or you may cause it pain by not getting it necessary care when it is injured or sick,” he ended.

Since 2015, only 50 people have appeared in court on charges related to the ill-treatment of animals in Malta, an average of just 12 cases per year.

There are no clear figures available as to how many of the 50 were found guilty.

“This remains an unprecedented sentence for such a situation, so kudos to magistrate Joe Mifsud,” Bezzina ended.

READ NEXT: Fgura Gets Its Own Primary Healthcare Clinic, Including Mental Health Services